What’s so Hot About Iceland? 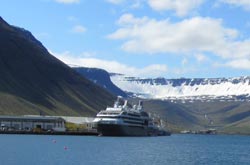 If you’ve only seen Iceland in a brochure, you may be surprised.

I last visited Iceland this past summer as part of an Oceania cruise that traveled through Norway, Scotland, Ireland and Denmark.

Despite the strong inner feeling or notion of its name, Iceland is anything but a frozen arctic land. The landscape was a lush green, the waterfalls appeared to engulf the snow-capped mountains overlooking the fjords, and the blazing sun dips down the horizon but never sets. Iceland is the least populated country in all of Europe but the feeling of home exists as I mingled through the locals in Isafjordur and Reykjavik.

Contrary to what you may think, Iceland is a rare place where the Atlantic Ocean is heated by a constant flow of warm weather pumped into the sea.

Isafjord has been for a long time one of the largest fishing industry centers in Iceland. Cultural life has flourished for through the ages with a regional library, a music school, an art school and an art gallery.

Reykavik is the capital city of Iceland. I was amazed at the environmentally geothermal beach where you can soak in the sun and bathe in water as warm as the Mediterranean. Here stands a church that is an architectural marvel visible from any point in the city. The Blue Lagoon is a luxurious spa with steamy, mineral-rich water reaped from beneath the earth.
I was so comfortable mingling with the Icelanders that were so willing to share their culture. The “warmth” made this port of call one of the highlights of my trip.